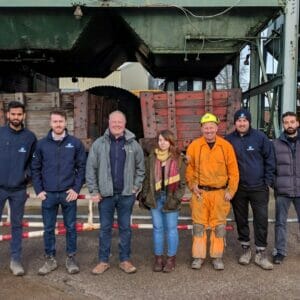 By Harrison on 28th January 2019 in Company News

Aarsleff Ground Engineering has now been involved in some major drilling & grouting shallow mine working schemes and with more on the horizon,  it was fitting to take learning outside of the ‘classroom’ and visit an authentic Yorkshire coal mine. On the 24th January 2019, several employees from Aarsleff Ground Engineering made a visit to the National Coal Mining Museum in West Yorkshire to experience at first hand the geology of a mine via a drift walk and an underground tour.

The area is one of the few locations in the UK where the public can participate in underground tours of a coal mine that are led by former miner and tour guide Stephen Oxley, who began work as a miner in 1978 until they closed in 2004.

Together with the tour, limited surface outcrop (visible exposure of bedrock or ancient superficial deposits on the surface of the Earth.) and the inclined ventilation drift, the team were treated to the best geological exposure and information.

First, the team walked along the inclined cross-measures ventilation drift, which acts as a second egress, and provides a unique educational resource for the study of Coal Measures rocks. Following on, the underground tour took Aarsleff employees 140m down the Caphouse No.1 Shaft to view former workings and exhibits in the New Hards Seam Workings.

The trip to the NCM was a fascinating opportunity to learn first-hand about the aspects of early and modern coal mining extraction methods such as pillar and stall and longwall, the machinery that was used to cut, transport and support the roof, the dangers of mine gas and also most importantly what geological structures, minerals and rock properties would help miners understand where workable seams could be found. As an estimator who prices drilling and grouting projects around the UK this trip was beneficial because it developed my understanding of how coal is mined throughout the 18th, 19th and 20th century, and to help provide clues as to what areas are most likely to have increased risk of subsidence for any modern-day developer.

Caphouse Colliery is situated on the north side of the A642, mid-way between Huddersfield and Wakefield. Coal production at Caphouse ceased in 1985 when the mine closed in association with downscaling of the mining industry in the UK. In 1988, the site was re-opened as the Yorkshire Mining Museum with technical support and assistance from the British Coal Corporation. The area has a history of coal extraction dating back over 500 years.

The Ventilation drift consists of two legs, 250m in length with an abrupt change of direction between the two legs. Several coal seams, in particular the Flockton Thick, Flockton Thin, Old Hards, Green Lane and New Hards coals, are traversed. The ventilation drift is supported by steel arches with timbering or metal sheets between each arch. Consequently, exposure along the drift is not continuous and is mainly accessible via a series of refuge holes, originally created to provide a safe space for miners to avoid passing coal tubs. The inclined ventilation drift enables access to about 100m of this stratigraphical interval, which includes economic coal seams and associated inter-seam strata as well as recent mineral precipitates including calcium and manganese carbonates, manganese oxides and iron oxyhydroxides.