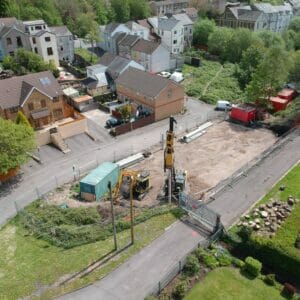 Aarsleff Ground Engineering were appointed by Weston Contractors on behalf of their client RCT Homes to undertake the driven piling for an apartment block in Forge Lane, located within the county of Gwent which is in the Wales region of the UK.

The site is approximately 900m2 in area. Houses are located to the east of the site, on the other side of Forge Lane, and a bowling green and recreation area are present to the west and north. The site is underlain by superficial deposits of Glacial Sand and Gravel, which is also underlain by Upper Pennant Coal Measures generally consisting of sandstone and mudstone. The site appears to have been on the edge of a coal spoil heap from before 1877 to between 1952 and 1961 when the spoil heap was remodelled and recreation grounds were located to the west of the site. The east of the site was occupied by unspecified buildings from between 1952 and 1961 to between 2006 and 2015 when they appear to have been demolished.

Aarsleff deployed their Banut 300 midi-rig to install 55No. Driven Precast Concrete Piles of 250mm square diameter. Due to its compact design, the rig is perfect for residential and restricted access sites. Initially, a CAPWAP analysis was undertaken on 3No. piles on the 7th of April to determine the load bearing capacity and load deflection characteristics – A CAPWAP is necessary as it evaluates the immediate settlement characteristics. The main works were carried out on the 7th May for 1 working week and were completed to schedule and to the client’s satisfaction.

Check out the short video below about our precast piling works in Pentre.