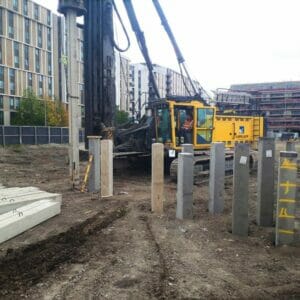 Piling at Chobham Manor for the Queen Elizabeth Park Phase 3

For Phase 3 of the development, Aarsleff utilised its Junttan PMx22 piling rig to install 1,170 250mm square precast concrete piles of up to 12 metres  in length. Aarsleff also used its Comacchio MC1500 drilling rig to pre-bore the ground to a depth of eight metres in order to penetrate the limestone stabilisation band and allow for the piles to be driven to the required depths.