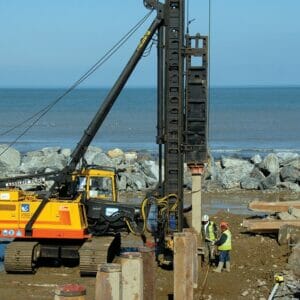 Funded by the Welsh Assembly Government and Ceredigion County Council, the sea defences at Aberaeron on the West Wales coast of Cardigan Bay have undergone extensive repairs to prevent further erosion and the lowering of beach levels, as well as reduce the risk of flooding during storms in the  Irish Sea.

Specifically, the project involved replacing some of the dilapidated timber groynes along a 540m long stretch of the town’s North beach, with rock groynes and revetment protection added plus a flood bund built to protect low lying properties and a near-by holiday caravan park. The plan also included building two new 40m-long rock groynes, one straight and the other with a 15m-long north-facing dog leg spur, just north of the town’s harbour entrance, which is bisected by a new timber groyne. An additional eight timber groynes were erected on the beach and a 280m-long steel sheet piled retaining wall driven inland to provide a flood cut-off barrier at the northern end of the scheme.

The works were designed by consulting engineer Atkins, on behalf of the Council, with BAM Nuttall appointed as the main contractor. Bam Nuttall in turn employed Aarsleff to install the 168 Greenheart timber piles, for the nine new groynes which ranged between 30 & 40 metres in length.

The first task was the importing of all the rock groyne armour from a North Wales quarry and stockpiling the larger boulders in a bund along the toe of the beach, to act as temporary and partial protection during the replacement of the timber groynes. Work was tricky, as it had to be undertaken around the tides, including the trenches that BAM Nuttall had to dig alongside the old and decaying timber piles, so that they could be pushed over prior to removal and installation of the new groynes.

The 168 Greenheart timber piles installed by Aarsleff were 305mm square section piles in varying lengths between 4m and 8m with pyramid-shaped steel points and steel rings on their tops. Between 17 and 18 piles, depending on their length, were driven at 2.5m centres and in a straight line down the beach. Using its Banut 700 self-erecting pile rig and working to a 4-hour window between high and low tides, the piles were driven through a mixture of beach sand, cobbles and boulders. All piles were driven to specific levels and at peak operating Aarsleff was installing 11-12 piles per day, against an estimated programme of 9 piles per day.

On completion of each groyne, BAM Nuttall followed behind, bolting on 225mm by 75mm Greenheart planks to the face of the timber piles. The temporary rock bund was removed and replaced with two new rock groynes and a blanket revetment was placed the length of the new defences from the shoreline and out to about 20m down the beach to complete the coastal defences.

View all posts by kirk →