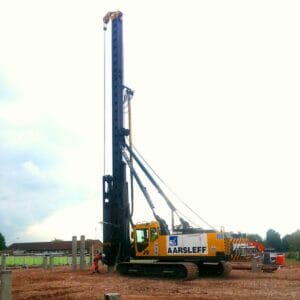 Beacon Barracks in Stafford was identified as one of the major arm hubs for some 15,000+ returning military personnel from Germany. The Defence Infrastructure Organisation(DIO) awarded the contract to develop the site to Lend Lease’s construction team, who subsequently awarded the foundation works to Aarsleff.

The project included some 300+ high quality homes, together with a range of mixed-use facilities including workshops, living accommodation, offices, garages, retail and catering, in addition to a medical and dental centre. A major project, the development has been constructed in a phased manner, as troops from 16 Signal Regiment and 1 Armoured Division Signal Regiment are due at Beacon Barracks in 2015. With the imminent arrival of some of the first returning troops, the foundations scope of works was up against very tight schedules, which had to be factored into the overall programme of works.

Specifically, Aarsleff was directly involved in the construction of 25 new buildings, as well as the refurbishment of eight exisiting buildings. The first piling element of the project saw Aarsleff install over 1,000 piles for three of the new structures in just 7 weeks. The piling was carried out using two if its own Junttan PM20 rigs, which arrived on site mid-May 2014.

Once on site Aarsleff was also asked to pile an additional building, as upon further investigation the client found that there was an existing building beneath the planned building, which required digging out and piling before construction could continue. An additional 120 piles were required for this added element of the project.

Beyond the provision by the client of the platform on which to work, Aarsleff provided a full piling solution from start to finish, including the delivery of additional services as and when required.

“This was an exciting and prestigious project for Aarsleff and required a good deal of planning and coordination with all parties involved. As a Government Capital Expenditure project on behalf of the MOD, Aarsleff worked closely with the Lend Lease construction team responsible for managing the project, as well as with design consultants URS, to ensure the pile design and layout conformed to Eurocode EC7”.