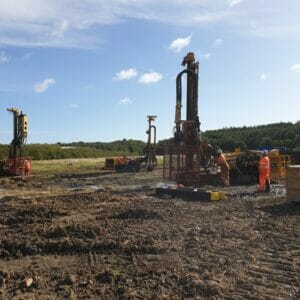 In Low Prudhoe, Newcastle, a new retail park situated off Princess Way is being developed by Robertson Construction. The new retail park will feature six food and non-food stores, two pub/restaurants, a drive-through outlet and over 350 parking spaces.

The Harvey seam, located in county Durham, was worked from 1902 till 1984 for coal used in houses. Coal and mudstone were identified in the ground investigation across various areas on the
site, including signs of possible workings on the Harvey seam.These were located from 40m depths and beyond.

Robertson Construction awarded Aarsleff the ground stabilisation works across the site. At the beginning of September, Aarsleff commenced drilling and grouting works. A total of 299no. holes were drilled to average depths of 40m (max depth of 50m) to treat the Harvey seam. Over 1,780sq m of the site were treated with over 2,100 Tonnes of grout used.