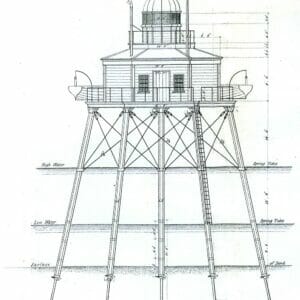 Ground Anchors – The History: The main purpose of geotechnical ground anchors is to prevent horizontal movement, while stabilising retaining structures, including sheet pile, bored concrete pile and steel tubular walls. Additionally, they can prevent additional movement or stabilise existing retaining walls or bridge abutments. Other applications could be in cofferdams, where internal bracing causes construction problems, in dock walls and marine structures, where dock walls need to be stabilised and strengthened, and on the river and canal walls, as tieback Ground Anchors can be utilised as either a permanent or temporary component to any construction project.

In the beginning, there were trees to tether an animal, tie up a boat or guy a structure. And with the clearing of land, wood stakes were often used. With heavier loads to support and no available trees, the log deadman became the preferred method of manufacture anchors. 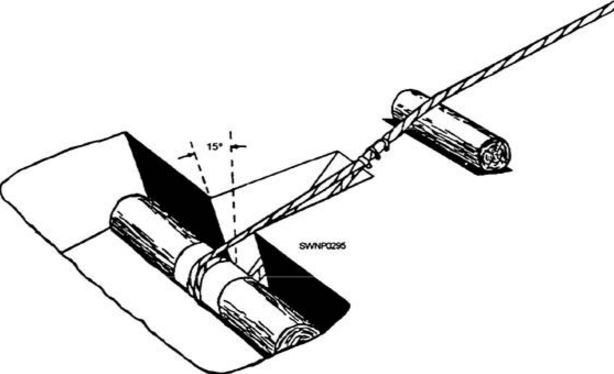 Early man-made anchors were attempts to simulate the root structure of a tree with steel. These had little use.

The earliest manufactured anchor was a screw foundation designed in 1833 by a blind Irish Engineer, Alexander Mitchell. Mitchell’s screw foundations were used in the construction of lighthouses and beacons around the world. He is known as the inventor of the screw-pile lighthouse. Originally working in brickmaking in Belfast, he invented machines used in that trade, before patenting the screw-pile in 1833, for which he would later gain some fame.

The screw-pile was used for the erection of lighthouses and other structures on mudbanks and shifting sands, including bridges and piers.

In 1848 he was elected member of the Institution of Civil Engineers and received the Telford Medal the following year for a paper on his invention. 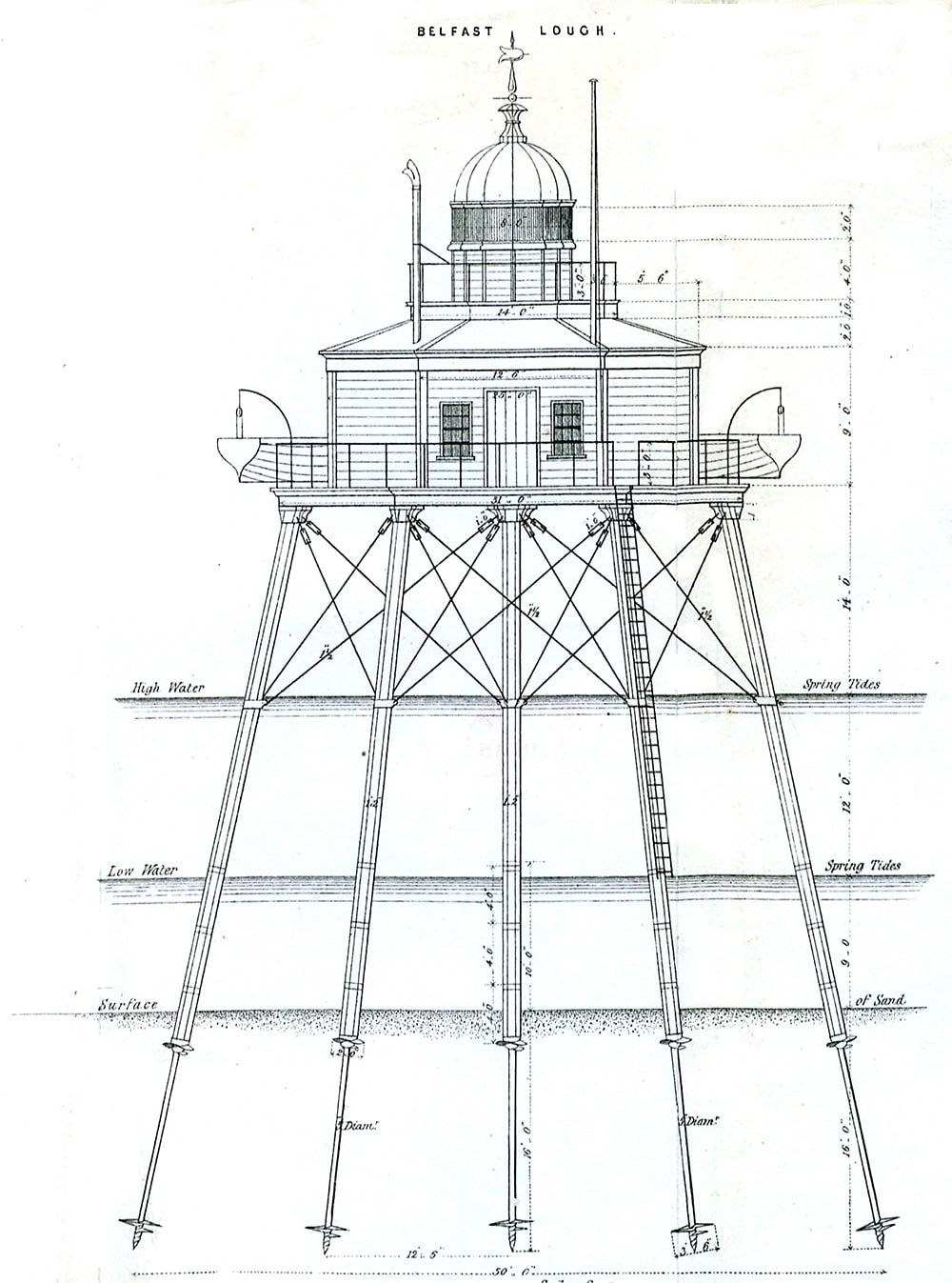 There were few improvements in anchoring until February 1, 1876, when the Picket Stake was introduced. However, acceptance was limited. While these were the earliest manufactured screw anchors, it was not until the late 1950s when Chance introduced the Power-installed Screw Anchor that screw anchoring found widespread acceptance and recognition.

The world’s first practical earth anchor was invented in 1912 by Albert Bishop Chance. A disastrous ice storm hit the Centralia, Missouri telephone system managed by Mr Chance. New poles had to be put in, new wire strung and almost every pole had to be straightened or re-anchored. There was not the time for deadman anchor installations. The elements became the mother of invention as Mr Chance invented the anchor that became known as the “Never-Creep”. Anchoring took its first step toward becoming a science with the Never-Creep. Originally, this anchor consisted of a half of a two-foot length pole with a hole through the middle of the rod. The rod had an eye hand forged and welded by a blacksmith. It was fitted with a threaded end and nut – no galvanising. In practice, the rod was driven to hit a pre-drilled anchor hole. The log anchor was held in the hole by one lineman lying on the ground while a second lineman pushed on the rod until it threaded the hole. The nut was held by a wire device on the end of a broom handle while the rod was rotated to engage the thread.

The first commercial “Never-Creeps” were cast iron. They were so fragile they were shipped packed in barrels like dishes. With the addition of creep guards and a change to malleable iron, there was little further improvement until World War II forced a change to wrought steel. 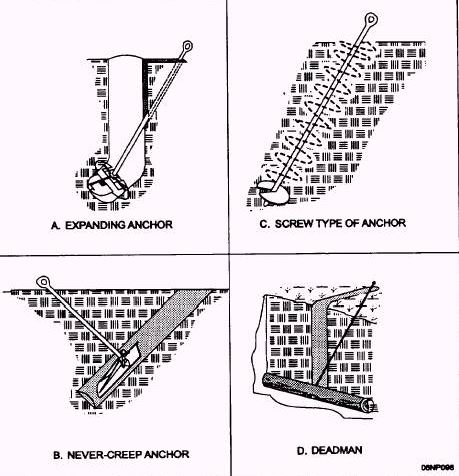 Chance had long considered and been asked by utilities to develop an anchor which could be installed by power equipment with less expenditure of human effort, more uniform results and lower installed costs. The result is the Power Installed Screw Anchor. Chance developed the first anchoring manual in 1945. This manual described a number of classes of earth producing different holding capacities. The Chance soil classification chart still left a gap in communications between the field and the manufacturer. It was necessary to make an excavation before soil could be correctly classified. This was too late to be of much assistance in placing orders for anchors.

This problem resulted in the development of an earth probe in 1963. Using the Soil test probe, numerical data may be obtained concerning the firmness of the soil beneath the surface without disturbing the soil.

Throughout the years, anchor studies have resulted in the compilation and documentation of a wealth of anchor knowledge, the knowledge that enables us to accurately predict anchor performance in most soils.

Aarsleff Ground Engineering installs all types of temporary and permanent drilled ground anchors. We use ground anchors for spread foundation and for anchoring of permanent and temporary structures in clay, soil, gravel or sand – without excavation, casting or damage to the foundation. Aarsleff has a wealth of experience in the design and installation of ground anchor systems. 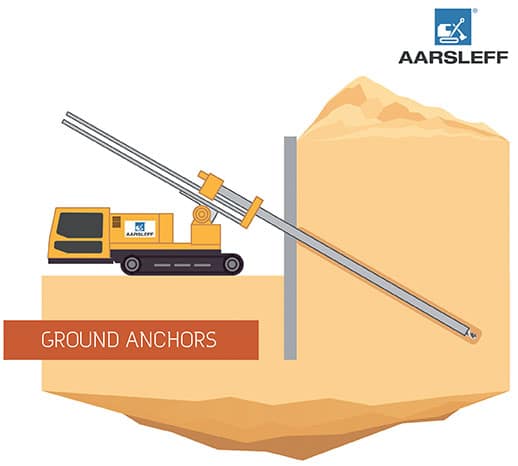 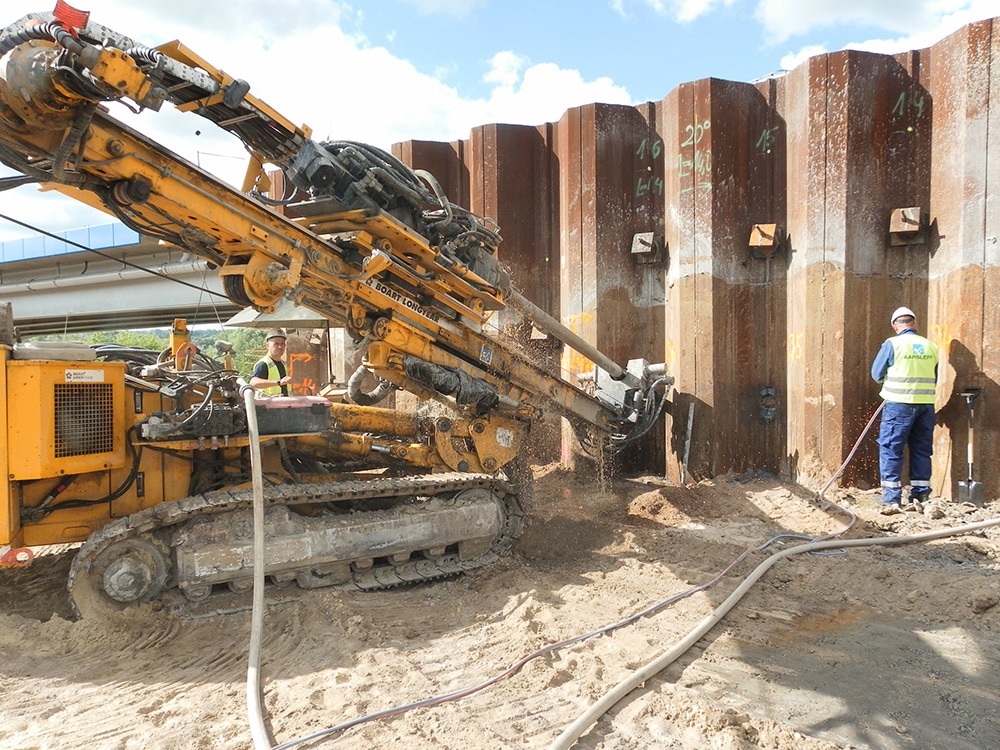