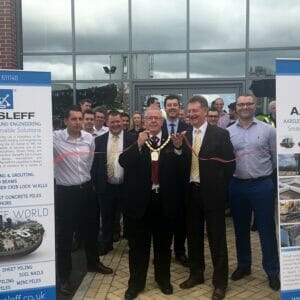 Aarsleff Ground Engineering celebrated its 25 years of trading today to coincide with Aarsleff’s official opening of its new offices in Newark, Nottingham.

“25 years of trading in the UK is an enormous land mark for Aarsleff. From a standing start and despite the many challenges the construction sector continues to throw at us, Aarsleff has grown to become a major force in the piling and foundation sector and continues to expand its operations into new sectors. As the company has grown so too has our office needs and to be able to announce the opening of our new and greatly enhanced office facilities with our 25th anniversary is great.”

The office was formally opened on 28th October 2016, by Chairman Cllr Roberts of the Newark Sherwood District Council and Cllr David Lloyd, who joined staff and those who helped with the office build, in raising a glass to celebrate its 25 anniversary landmark.

The event saw a warm welcome and thank you address by Managing Director Chris Primett,  an informative presentation delivered by Kevin Doyle on the heritage and history of Aarsleff, followed by an interactive and motivational presentation by General Manager Kevin Hague on ‘Driving a Business Forward’.

The Newark Advertiser captured the event with photos featuring Cllr Roberts cutting the red ribbon to officially “open” Aarsleff’s new office, and staff members standing proudly in front of the new head office. A selection of food and drink ended the proceedings nicely.

On a steep growth curve, Aarsleff’s new office has been designed to accommodate its increasing staff numbers as well as provide a more modern and professional work environment to take the company into the future.