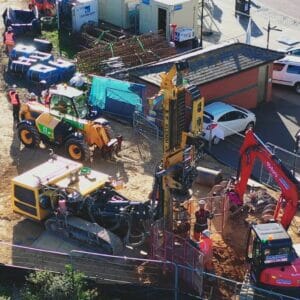 King Edwards Bay is a small sandy beach enclosed by grassy banks and sheltered by cliffs, located at the foot of Tynemouth Priory and Castle – a historic site run by English Heritage. It is one of the most recognisable landmarks in the North of England. The cliff face had been remediated poorly in the 1980’s and was in imminent danger of collapse, threatening local pubs and restaurants on the beach and the cliff. Aarsleff Ground Engineering were one of 8 contractors contacted by North Tyneside Council to provide a geotechnical solution to the failed cliff face.

Acting as the main contractor, as well as scheme designer and self-delivering most geotechnical aspects of the work, Aarsleff provided a two staged solution to develop a scheme design that would provide a 120-year design life in remediating the failed slope. Stage 1 included the ground investigation works including trial pits to determine the nature of the cliff failure and to provide a cost-effective solution.
Stage 2 required the installation of a contiguous piled wall, 10m in depth and 300mm in diameter, secured with a capping beam. Aarsleff then provided a scaffold platform on the cliff face, for demolishing 3m of the failed cliff face. Aarsleff demolished the cliff face until they reached competent sandstone. They then installed 3m long rock bolts to secure back to the cliff, a gabion basket wall within the voided area and shotcrete to the new face of the wall.

Due to the emergency nature of the works, the scope of the final product was not known at tender stage, such as knowing the final dig level of the demolition. However, through detailed design work and early engagement with supply chain partners, as well as the local council, Aarsleff were the only contractor to provide a scheme design that was cost effective and managed the risks on the project, and therefore were successful in being awarded the scheme.