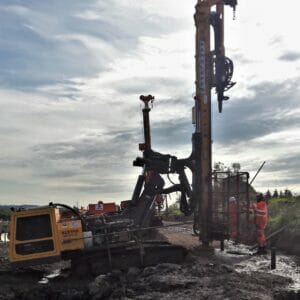 Aarsleff Ground Engineering have completed on site the drilling and grouting stabilisation works for a new road realignment scheme on the A737 between Beith and Dalry in Scotland.

The scheme will see a new section of carriageway constructed, removing a series of sub-standard bends which exist on the old stretch of road, along with adding new safety features and junctions. The new stretch of road will deliver benefits for long-distance drivers travelling through Beith and Dalry.

Aarsleff were award the ground stabilisation works by Interserve, who were working for the national transport agency for Scotland, Transport Scotland. Aarsleff deployed three of its drilling rigs at the beginning of July to treat approximately 2,600m2 of the site.

The initial probing was carried out on a 12m x 12m grid, with the holes drilled to an average depth of 24m. Aarsleff installed a perimeter grout curtain to the treatment area before they could carry out the main treatment works which were done on a 6m x 6m square grid. Due to the site being close proximity to farms and residents, Aarsleff worked closely with the main contractor to make sure there was minimal disturbance to the surrounding community.