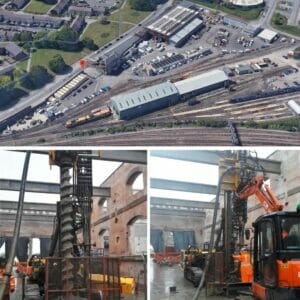 The depot, which is off Nineveh Road in the district of Holbeck, has been there since the 19th century servicing steam trains and storage of machinery up until 1985 when all locomotives were moved to other depots in the area. Since then, it has been used as a storage facility and office space for rail workers.

The new development at the MDU will provide a provide a more consolidated and modern facility for the Network Rail operational staff in the Leeds area, along with increasing the capacity and efficiency of the Holbeck site.

Buckingham Group awarded Aarsleff Ground Engineering the restricted access piling contract for the foundations of a new mezzanine floor being installed within the existing engine shed. With only 7 metres headroom within the building, Aarsleff deployed its Klemm 806-3G and Klemm 702 to install the 38no. 300mm diameter Sectional Flight Auger (SFA) piles across two visits, with average pile lengths of 9.5m. Both restricted access rigs were capable of piling in the mixture of clays, gravelly sands and mudstone ground conditions.