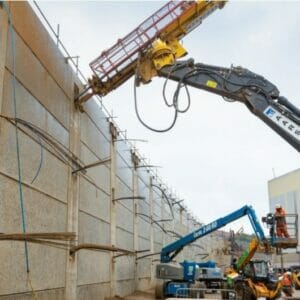 By louise on 15th December 2020 in Company News

In just over 12 months, one of the UK’s largest soil nail walls, a large king post retaining wall and two further reinforced concrete retaining walls, have been installed in a major engineering feat on Phase 3 of the Sunderland Strategic Transport Corridor (SSTC3).

The £40m SSTC3 project – which is being delivered by Esh Construction’s civil engineering division, Esh Civils, on behalf of Sunderland City Council – will create a new 2.5km uninterrupted dual carriageway link to the Northern Spire bridge and the city centre.

SSTC3 begins at the southern end of the Northern Spire and continues through the former Pallion Shipyard, underneath the Queen Alexandra Bridge, into Deptford Terrace and onto the city centre. The retaining structures were necessary to create space for the highway between the former Pallion Shipyard and the upper existing highway and Tyne & Wear Metro line, given a height difference of 20 metres separated the bordering land.

The largest of the new structures is the soil nail wall which was introduced as a result of a value engineering activity, providing time and cost savings for all parties.

View all posts by louise →