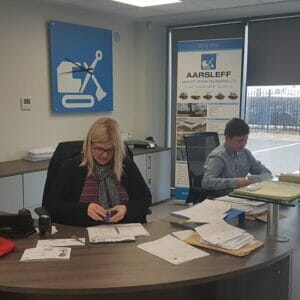 Aarsleff had the pleasure of working with Ryan last week, a student from Newark Academy, who embarked on his work experience.

Ryan enjoyed his experience here with us here – indeed, all staff members found him to be helpful, polite, articulate, quick to learn and embracing of all the opportunities presented to him.  Ryan had a factory tour, spent time in Administration, Estimating, Design, Accounts and also learnt about Health and Safety.

We spoke with those Aarsleff staff members who worked directly with Ryan last week to hear what they had to say:

“Ryan reviewed site maps and layout; and compared them with geological drilling records to produce a 3d geological cross section of the site at York Community Centre.

He learnt a bit about geology and how to compile  information to use it as engineering evidence. He was a polite and enthusiastic young man and left a positive impression on me.”

“Ryan sat quietly while I was explaining various details about Estimating, then occasionally spoke up to either ask a question to gain clarity or make comment to show he understood the content”

“I discussed with Ryan the Various areas of IT and specifically what we did as an internal corporate IT department. He followed me on a couple of ‘fault finding jobs’ and I also gave him a quick tour of our Server Room, describing the purpose of the various devices. Ryan was Keen and attentive, and asked relevant questions. He seemed to be interested in IT and enjoyed learning what we do here.”

– Simon Pick, IT and Network Supervisor

“Ryan was very polite, he showed willingness and was very eager and excited to learn, We loved having him. When Ryan was asked about what he wanted to do as a job, he said filming.   Since he came to Aarsleff he said it had changed his mind and he might even consider a job with us in the future!”

Whilst Ryan was with me I showed him the procedure of inputting enquiries on our software. I explained this step by step and he learnt very quickly. I also explained what we use Barbour ABI for, how to look for enquiries on this and how to search for specific companies/projects. Ryan payed attention the whole time and showed great interest. He was very positive and a pleasure to have in the office. I wish him all the best in his future and career.

Ryan spent the morning on Reception so I showed him how I answered & transferred calls to the relevant people, and took messages and forwarded to the relevant people if they were away from their desk. I showed him how I logged all calls on the journal. Showed him how I meet and greet visitors/couriers when they walk through the door. He was given a task of sending some memos out to site personnel, which he had to put in piles and put in envelopes, and then he put address labels on – and franked using the franking machine. He sent some Applications for Payments to clients, this involved scanning, typing and sending an email to the client. He scanned and saved various documents for me. He also did quite a bit of photocopying as well. I think he learned a lot about the workplace whilst he was here. Ryan was very enthusiastic, willing, eager and keen to learn.

Ryan was a lovely young chap who was very keen to learn and seemed to have a fairly balanced idea of what he wanted to do in the future. I ran through the basics of the Planning & Transport office with him and he showed interest and asked well thought out questions. It was very nice to hear how welcome everyone at Aarsleff had made him feel, so much so said he wants to come and work for us when he leaves school!

From all the team at Aarsleff Ground Engineering, we would like to thank Ryan for his commitment and hard work. We wish him every success in his future endeavours.