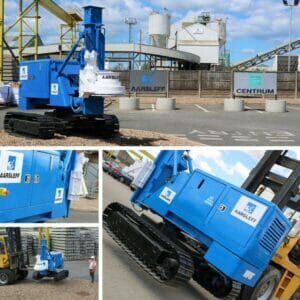 Over the past 4 months, Aarsleff Ground Engineering’s Plant department have been working on a side project – a new centre piece to stand proudly outside its head office in Newark, Nottinghamshire.

The Baby Mait drilling rig, which now resides in the car park entrance, was originally used to install bored piles for projects within restricted access sites. In its busiest period, the machine worked on projects such as drilling the holes for King Posts at Copley Primary School and South Street in Stillington.

Due to its age, it was decided that the Baby Mait rig was to instead be repurposed and used as a display in the car park to complement the existing Aarsleff and Centrum Pile logos.

Just before Christmas, Aarsleff’s plant fitters were tasked to give the Baby Mait an overhaul, removing recyclable parts and refurbishing the rig to a presentable state. This included repairing the tracks, removing the engine, painting the body, auger head and tracks, and adding features to make the rig look authentic, such as the emergency stop button. Once completed, the Baby Mait was then forklifted into placed where it now greets staff and clients as they drive into the car park.

“This has been a fun project to work on. We stripped the Baby Mait down and recycled the usable parts for our second Baby Mait rig within the fleet. We then gave the rig a new lease of life with a fresh coat of Aarsleff-blue paint, branded stickers and some extra features to make the rig look the part!”