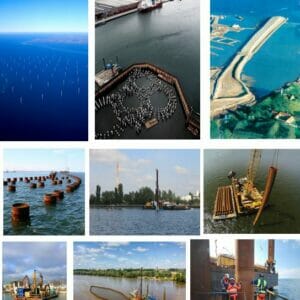 Aarsleff Group’s marine construction work includes projects in Denmark, Germany, Poland, the UK, Sweden and on St. Maarten in the Caribbean. Here are some examples from across the Aarsleff Group:

At Port of Aarhus in Denmark, Aarsleff built the construction pit for the new multimedia house and a quay structure for the new waterfront area. The construction pit is 8 metres deep and measures 100 x 100 metres. In the process, we demolished the old quays, carried out earthwork and pile driving for the construction pit and installed ground anchors. We have installed a total of 42,000 running metres of reinforced concrete piles of lengths up to 36 metres. In addition, we have drilled anchors in several levels, and many of these have been installed directly against water pressure. We have focused on the comprehensive safety measures for the work carried out very close to railway tracks in operation.

70 kilometres west of the island Sylt, Aarsleff has constructed the offshore wind farm DanTysk in the North Sea. The contract consisted of production and installation of 80 monopile foundations. The foundations consist of a monopile and a transition piece. The monopiles are up to 68 metres long and weigh up to 680 tons. The foundations are installed in water depths of up to 32 metres. The offshore wind farm will be able to generate a total output of 288 MW thus supplying energy to 500,000 homes.

Aarsleff was the turnkey contractor on Project Kronborg Culture Harbour. The project is part of the transformation of the harbour and the Kronborg area from a shipyard area to a modern cultural centre. We carried out earthwork and paving work and excavated the area with the extension of the harbour basin and the moat around Kronborg Castle. The area around the castle is visited by about 500,000 tourists each year, so planning and logistics have characterised the project. The road conversion, for example, was carried out in several stages.

The sheet pile wall of Køge Soil Deposit is part of a major partnering agreement on construction and operation of the 40-hectare soil deposit east of Køge Harbour. The outer perimeter of the soil deposit was constructed as a 1,200-metre sheet piled cofferdam and a 500-metre cut-off wall. In order to contain the 4 million tons of contaminated soil and to protect the environment, the sheet piles were fitted with interlock sealing and driven deep into the seabed clay. Subsequently, the 13-metre-wide double sheet pile wall was filled with 130,000 cubic metres of sand pumped in from dredging vessels.

Close to Swinoujscie in Poland, Northern Europe’s longest breakwater of a length of three kilometres has been completed. The project comprised placing of two million tons of stone, production and placing of 30,000 concrete armour units and casting of 100,000 cubic meters of concrete in the superstructure and breakwater. In addition to the breakwater, we constructed a 350-metre-long outer pier.

Driven Precast and Steel Tube Piling for a new 60,000-litre fuel tank base in Newhaven Port. We installed 250mm precast concrete piles of 26m length to support the new fuel tank base with our Banut 17 rig and 8no thick walled driven steel tube piles of outer diameter 508mm, 20mm wall thickness of 40m length. We also installed 146no 300mm driven precast piles for the O&M facility with our Junttan PM20 Rig.

We entered into a contract with the Norwegian Coastal Administration for an extension of the fishing port in the village of Myre in Vesterådalen in Norway. Myre Harbour is one of the most important bases for cod fishing in the area at Lofoten. The project was to improve the entrance to Myre Harbour and create a better wave climate in the harbour basin. Therefore, new stone breakwaters were constructed, and the entrance dredged.  In addition, a number of marine pipelines and cables were relaid, and a new area at the harbour constructed through backfilling with the material from the dredging work.

London Array is one of the world’s largest offshore wind farm. Aarsleff has produced and installed the 177 monopile foundations and installed the wind turbines 20 kilometres off the coast in the Thames estuary in the North Sea. The monopiles are up to 67 metres long and weigh up to 645 tons. Besides the monopile, the foundation consists of a transition piece with a weight of up to 343 tons and a length of up to 23 metres.