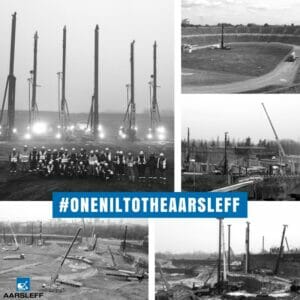 With the World Cup 2018 drawing to an end this Sunday, we throwback to the National Stadium Warsaw project where the Aarsleff Group deployed its ‘One Company’ approach to complete the piling contract for the 58,000-capacity stadium.

The ability for leading Danish civil engineering contractor, Per Aarsleff, and its European subsidiaries to pool and combine their expertise and resources, provides the flexibility to bid for and successfully execute huge projects which could otherwise be outside the normal capability of the group’s individual companies. The new National Stadium, built in Poland’s capital for the 2012 European football championship, demonstrated the capabilities of Aarsleff Group and how it can successfully complete, ahead of programme, a mega precast concrete piling contract. Aarsleff’s Polish subsidiary supplied and installed approximately 9,000 No. large section, heavily reinforced precast concrete piles in just five months. These provided the bulk of the foundation for the 55,000-seat stadium’s multilevel terraced seating and main support stanchions for the roof, with its retractable inner membrane over the playing surface. They allocated some of its rigs to smaller domestic projects and supplemented the stadium contract with larger rigs, operators and piles from their Danish parent company and other subsidiaries. By doing this, Aarsleff Poland was able to mobilise very quickly and the combination of resources, rapidly pooled together with established core operation and organisation in Poland, was the key to successfully completing the project.

The original stadium, on the east bank of the River Wisla, opened in 1955 and was built on the rubble from Warsaw devastated and destroyed by Nazi Germany in the Second World War. The new stadium foundations included 72 backward raking stanchions around its perimeter to support the fixed roof over the seating and integral folding and retractable membrane over the pitch. Inside there were nine levels in the arena, including a five-level concourse under the terraced seating for offices, conference facilities and restaurants and a further two lower levels for players’ changing rooms and press and two levels directly under the pitch’s playing surface for underground parking for about 1,700 cars. The stadium was scheduled for completion at the end of 2011, ready to stage the opening game, group matches and quarter and semi-finals of the Euro 2012 competition. Due to the potentially difficult piling in the compacted backfill, the stadium’s design team investigated and paid for a comprehensive pile testing regime to determine the suitability of different types of piling and to help avoid potential problems during the main piling works.

Aarsleff started onsite at the end of October 2008 and moved rapidly to build up the site team and rigs and create a large stock of piles on site. Due to local daytime traffic restrictions, piles were only allowed to be brought in at night, as the fleet of lorries needed to transport them would have considerably added to the already congested road network in Warsaw. Aarsleff assembled a fleet of nine heavy-duty rigs at peak production which included two Banut 850s, a Hitachi KH125 and KH180, three Junttan PM20s and two Junttan PM25s – all fitted with 7t to 9t hammers. Working 16h/day in two equal shifts, six days a week, the site team split the project up into 29 separate areas, each basically operating like an individual contract. Each sector was enclosed in a steel sheet piled cofferdam previously installed by Pol-Aqua. The main contractor bought and drove an estimated 30,000m2 of sheet piling using a range of piling equipment hired in from all over Poland. The old arena embankment’s inner sloping face was peppered by Aarsleff with a forest of precast concrete vertical and raking piles installed on four levels from the lowest basin level and up on the subsequent terraces to the top of the approximate 20m high level bank.

The shortest piles, of about 6m, were installed at the lowest level and gradually increased in length to up to 26m at the top of the embankment. Piles over 15m long were jointed and driven through the compacted rubble backfill to toe into the underlying sand. The required tension piles were installed to a present level, whereas the piles to take compression were driven to a predetermined set. At each location of a main roof support stanchion a congested cluster of vertical and raking precast piles surrounded and complemented a radial line of 1m diameter bored piles previously installed by another contractor. Aarsleff had to report daily piling progress to Pol-Aqua and conduct 33 static load tests and 140 dynamic tests, which were independently monitored and supervised by Poland’s Technical University of Wroclaw. Aarsleff successfully completed its five-month contract early in March 2009 and a few days ahead of schedule.

“Our success at the Warsaw Stadium has demonstrated that we are able to do mega jobs wherever in Europe as we can commit the necessary resources in a short time, which gives Aarsleff an advantage over competitors. We have done similar projects before, but this is one of the biggest, fastest and successfully completed in a very short time ahead of schedule. It’s easier in a decline to move rigs and other resources around, but even if we are all busy we have the flexibility in the group to move quickly as we have the common and important understanding of being able to help each other. In this case Poland had the benefit and maybe next time it could be Germany, Sweden, Denmark or UK. In the past we have had Danish rigs in UK, Polish rigs in Sweden, Germany and Denmark and German rigs several times in Poland. There is an exchange of equipment going on nearly all the time