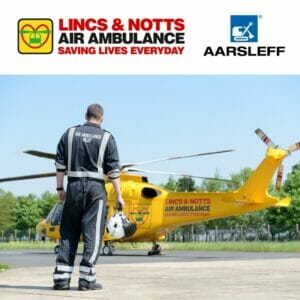 By Harrison on 27th August 2019 in Company News

Aarsleff Ground Engineering, specialist piling, geotechnical and retaining wall contractor, has selected the Lincs & Notts Air Ambulance as its next chosen charity to support. Based in Newark, Nottinghamshire, Aarsleff runs a ‘Dress Down Friday’ at the end of each month, with the money raised by staff donated every quarter to a nominated charitable cause. Staff swap their office wear by donning a more casual dress code, and each are asked to donate £2.

The Lincs & Notts Air Ambulance is a non-government funded charity, not part of the NHS, who provide a helicopter emergency medical service for across the Lincolnshire and Nottinghamshire counties.

This year is also significant for the charity, who are celebrating their 25th anniversary of service, being fully set up and operational since 1994. Since then, the charities highly skilled doctors, paramedics and pilots have airlifted thousands of patients using their state-of-the-art helicopters, providing the best chance of survival for those critically ill and injured in what is often their greatest hour of need. The team responds to on average of three calls per day, with the ability to carry blood which allows them to deliver potentially life-saving blood transfusions for patients they attend to. As a homage to their special Anniversary, Aarsleff Ground Engineering have chosen to support Lincs and Notts Air Ambulance right up to December.

Along with donations and support from the public and generous businesses, The Lincs & Notts Air Ambulance have 10 charity shops across the two counties where they showcase and sell pre-loved items, including clothing, accessories, homewares, electrical goods, soft furnishing, toys and games, books and furniture.

The charity are also aiming to move from 12 hours of operation per day to 24 hours. The change in hours will enabled them to respond to an additional 400 patients every year. To provide a 24/7 service, the charity needs to raise £4 million per year to cover the cost.

To find out more about the Lincs & Notts Air Ambulance, along with how to support the lifesaving work they do on their website: https://www.ambucopter.org.uk/