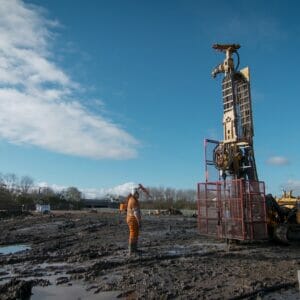 Drilling and grouting project for new retail park in Northumberland

Aarsleff Ground Engineering have been awarded a drilling and grouting contract by main Contractor Robertson Construction North East, as part of the Phase 2 development for a new retail park in Shiremoor, Northumberland for main client Northumberland Estates.

Shiremoor is a large village in the borough of North Tyneside, originally built as a colliery village to accommodate the miners of the local pits. The area grew with the expanding coal industry, however as the industry declined through the 20th century , Shiremoor transformed itself into a commuting town for Newcastle upon Tyne. In 2015, as part of the areas development, plans were revealed for a multimillion-pound retail park that includes a new Aldi, Costa Coffee and retail terrace creating over 180 jobs.

Following on from Aarsleff’s successful completion of Phase 1 works in November 2017, this contract includes the investigation and consolidation of underground shallow mine workings beneath the building footprints. Covering an area of 8500m2, Aarsleff have mobilised their Boart and Klemm 806 rotary percussive rigs for the drilling and grouting works across the site. Aarsleff will drill approximately 512 vertical and inclined 75mm diameter holes to 38m levels, and then mix and inject grout under pressure to consolidate any worked coal seams.

Aarsleff are already familiar with the area having successfully completed Phase 1 of this project in November 2017. The drilling and grouting operation will be carried out in accordance with CIRIA document 32 and as a proud member of the British Drilling Association, we look forward to carrying out another high quality and value engineered scheme.

Aarsleff voted as Top 10 Specialist Contractor to Work for!
Piling contractors journey – From the ground up