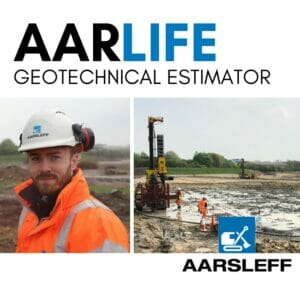 By Harrison on 16th December 2019 in Company News

In this AarLife post, we speak to Aarsleff Ground Engineering’s Geotechnical Estimator Chris Purvis on how he became interested in geology and why he chose a career in ground engineering.

I studied Geology with a BSc (Hons) at Plymouth University between September 2010 and June 2013. From September 2016 for one year I undertook a Master’s in Petroleum Reservoir Geoscience at the University of Liverpool.

Why did you choose to specialise in Geology and what made you change to Geotechnical Engineering?

Students who venture into Geology often develop a passion early on, in-part from watching films such as Jurassic Park, Volcano, The Core or The Day After Tomorrow. I was no exception. These are great films! In-addition to visits to the cinema, my motivation to specialise in Geology came from an inspiring teacher who had such an interest in the subject and the ability to enthuse his pupils with his knowledge and stories which were linked into many field trips. I learned that drilling through rock was the way to unravel an ancient geological story embedded within stratigraphy which could be thousands of metres beneath the surface of the earth. I quickly realised that this was something that really interested me, and I wanted to learn more.

Following the completion of my Bachelor’s degree in 2013 (and listening to many bad pun jokes e.g. geology rocks, geologists will date anything, don’t expect perfection from a geologist they all have their faults), I started my career working for a major US/French Oil and Gas company. This involved a lot of travel to offshore locations in Europe and Africa. I was involved in many types of operations including production, exploration, and on occasion complex high-pressure high-temperature (HPHT) wildcat drilling. The tasks that I carried out exposed me to the overlap between Geology and Engineering.

I was always keen to develop my further studies, so in 2016 I applied to take an MSc with a view to subsequent onshore work. Shortly after my second graduation, an opportunity arose with Aarsleff Ground Engineering in their Geotechnical Engineering department. I had always found this subject interesting at Plymouth University, so grabbed it with both hands.

What has been your best experience as a geotechnical engineer to date?

My favourite experience was acting as Project Manager for Phase 2 of a project in Shiremoor, North Tyneside. This consisted of drilling and grouting old coal workings prior to the construction of a retail park including a supermarket and garden centre. The project lasted for 3 months from July to September 2018. I particularly enjoyed the responsibility of monitoring and managing project costs which involved reviewing the resources and programme on a day to day basis as well as working alongside other members of the team. It was very interesting to learn about the challenges associated with coal mine workings of which there are many in the Tyne and Wear region.

Since mobilising to site in early April 2019, we have discovered several mining related features including shallow coal mine workings in two coal seams between 15-18m and 27-29m, some ironstone mine workings from 0-10m in the form of bell-pits, a masonry lined water well from an old farm-house and a disused Victorian railway tunnel running beneath the site at 35m bgl measuring 150m long, 8m wide and 7m high.

Thanks Chris for your commitment and keep up the good work!