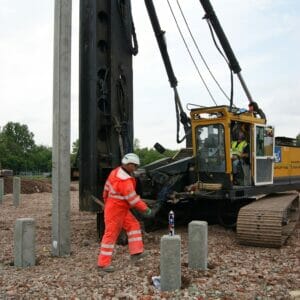 By jess on 3rd January 2016 in Case Studies, Piling, Residential

Driving of precast piles for new accommodation units at Baker Barracks military base.

Thorney is an island which juts into Chichester Harbour in West Sussex. The old village of West Thorney lies on the East Coast of the Island and is incorporated into the military base. Baker Barracks, Thorney Island is home to 12 Regt RA and 16 Regt RA. 12 Regt RA is the Army’s only Close Air Defence regiment, and similarly 16 Regt RA is the Army’s only Short Air Defence regiment.

Using the Junttan PM20L-10, Aarsleff installed 157No. 250mm square precast concrete piles. This, along with 4No. Replacement piles for obstructed piles installed resulted in a 10% increase from the offer scope. The accommodation required individual pile load up to 500kN in difficult ground conditions. Piles were driven through overlaying clays to depths of approximately 4m, and into the varying under laying chalk as friction piles based upon a length design. This design has been confirmed via Dynamic Load Testing results.