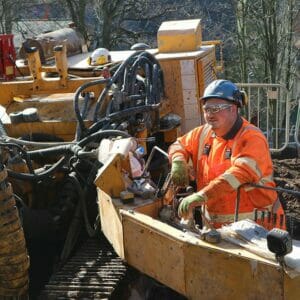 UK Sheet Piling contractor, Aarsleff Ground Engineering, was awarded the ground works and piling contract on behalf of main contractor Bowmer and Kirkland Group, for a new 365-bed student accommodation scheme in Durham. Following the closure of the hospital in 2010, the high-end student development comprises 82 student studios and 281 flats.

The £31M valued scheme was initially designed with a continguous piled solution to secure the periphery around the substructure. Aarsleff offered B&K an alternative design, which would give them a cost-saving of around 30%. Aarsleff’s Senior Technical Estimator, Ashley Carter explained “the contract was originally specified as a continous pile and reinforced concrete retaining wall solution on a site that is highly irregular in shape. We proposed a sheet piled solution as an alternative – not just for economics, but to allow excavations to be undertaken across several elevations on the site”.

The ground conditions lent themselves to sheet piling and comprised a combination of made ground overlying glacial sands and gravels. Using a 70T capacity crawler crane operating at a maximum 6m radius to unload and handle both piles and hammers, Aarsleff drove the piles using conventional methods – a 900kN high-frequency Movax vibratory hammer mounted on a 25-38T base excavator unit along with a 2400kg/m impact hammer to install both the anchored sheet pile retaining and cantilever wall, the former of which was founded using Arcelor Mittal GU8N piles.

A total of 312no piles were installed: 224no 5-7m long sheets for the cantilever section and 82no 12m long sheets for the anchored retaining wall. Aarsleff also installed 22no ground anchors, which were drilled through the top of the sheet piled retaining wall to stabilise the shell and core of the elevated eastern wing of the former hospital building.

The ground anchors were 15m long Dywidag Threadbare Anchors, which were an actively tensioned ground anchor system – 5m Free length and 10m fixed length on a 40mm bar. The anchors were installed using Aarsleff’s specialist Boart Longyear 14.5T DeltaBase DB102 double-headed drilling rig. The anchors themselves were formed in three parts – two 6m sections plus a 3m end section and were installed at a 45% angle, leaving 14.4m in the ground and 600mm protruding. The placing of each anchor was undertaken in three stages and within the steel casing, both with the aid of a JCB excavator and placed using a tremie to displace the water.

As part of the three-phased groundworks package, Aarsleff also installed 238no CFA bearing piles to form the foundations of the two new structures, which were a mixture of 300mm and 450mm diameter piles to a maximum depth of 22m below ground level using a Casagrande B125 rig.