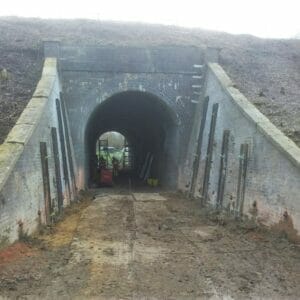 Aarsleff Ground Engineering have recently completed installing soil nails to repair and stabilise the failing wing walls on an existing bridge in Churchdown. Contracted by Taziker Industrials, Aarsleff installed 20No. 30-degree R38-550 self-drilling galvanised soil nails varying from 6 to 10 metres in length into the wing walls of the bridge.

Aarsleff was also contracted to install steel wailing beams which were tied into the wall, providing stabilisation and preventing further movement. In addition, and on completion of the soil nailing, 12No. 65mm Weepholes were installed at a 5-degree incline using a marini mast powered by a 5-tonne excavator.

The project was part of Network Rail’s CP5 Western Renewals scheme to refresh and renew the railway infrastructure across the country. Aarsleff completed the works utilising a 5-tonne & 22-tonne excavator using both TEI Drill masts to drill the soil nails and the smaller Marini mast to install the required weep holes.