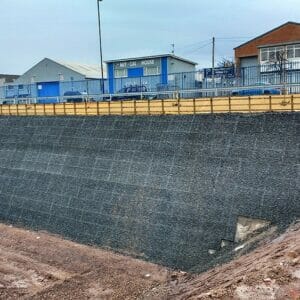 Aarsleff Ground Engineering has completed the soil nailing works for a 10m high by 200m long 65° permanent soil nailed wall at Fisher Street, Newcastle on behalf of Esh Group for main client Newcastle County Council. The permanent soil nail wall supports Fisher Street along the western boundary of the site, allowing the commercial development of a one-hectare site, as part of the Neptune Energy Park Project for Newcastle City Council. The ground conditions comprised Made Ground

The ground conditions comprised Made Ground and Glacial Till over the retained height, with a 2m thick layer of weaker Laminated Clay below the toe of the soil nailed wall. Aarsleff installed a total of 1,000 No. x nominal 100mm galvanised self-drilled grout-flushed soil nails on a 1.25m horizontal x 1.37m vertical spacing based on a diamond layout in an incremental top down sequence. The soil nail lengths ranged from 6m to 16m and were installed at 25°, perpendicular to the cut slope.

The permanent soil nail facing comprised of 150mm deep stone filled mesh baskets which provide an aesthetic semi-rigid and permeable facing, with minimal maintenance and is more cost effective than more traditional hard (shotcrete) facings. Initially, the rear mesh complete with geotextile fabric behind was installed tight against the cut clay face to prevent any fines being washed through. This was undertaken as soon as the soil nails were installed to provide temporary slope stability as the excavation proceeded. Then, upon completion of soil nailing works and reaching the toe of the slope the front 150mm deep permanent gabion baskets were constructed and then carefully filled with stone.Remedial works followed in January 2017

Remedial works followed in January 2017 due to a high pressure water main bursting in the road above the works and washing
materials through the ground to the rear of the completed wall causing movement to the top of the works and bulging at several areas throughout the works. The remedial works include installing 12.0mtr long self – drilling soil nails along the crest off the wall and the next row down with 9.0mtr soil nails to the remainder of the bulges. Steel plates were locked down on to the soil nails to prevent further movement.

“The project was challenging yet ultimately now a successful scheme. As a leading exponent of soil nailing, the project exemplifies Aarsleff’s experience and capability in major soil stabilisation works”