*We will not share your information with third parties 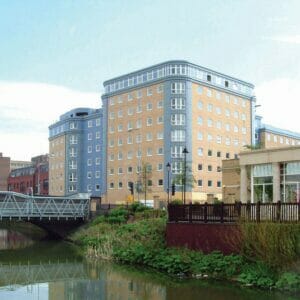 The new development houses some 569 students, as well as providing a ground floor retail complex. Developed by Bournston with main design and build contractor North Midland Building Ltd, the ‘JunXion’ as it is known, is nine stories in height and such was demand it was fully let in its first academic year. Aarsleff, working for North Midland Building installed over 340 precast concrete foundation piles for the construction.

A second development known as the Pavilions Village began shortly afterwards, with the first phase being the construction of a nine story building of 28 apartments with 4 and 6 en-suit study bedrooms and an further 36 studio apartments. Following the successful work on the ‘JunXion’ North Midland negotiated directly with Aarsleff the £150,000 supply, handle, pitch and drive service for the Pavilions Village.

Using its own Banut 500 self-erecting hydraulic drop hammer piling rig, Aarsleff installed over 1000, 250mm square section piles in lengths of 6-13m, which were supplied and manufactured by Centrum Pile Ltd, Aarsleff’s wholly owned subsidiary. The continuously reinforced piles were in clusters of two, three, four, six and eight, which are directly under the building’s columns providing individual pile loads of 440 kN.

Piling was not without its complexity, as this was a brownfield site, piles were driven through sand and gravel, overlying clay, overlying mudstone with most of the piles founded in sand, although some of the longer piles, where the sand and gravel was not thick enough to achieve the working load were driven to toe into the underlying clay. The piles were later independently dynamically tested by precision monitoring and control.

Mike Caitlin, Managing Director of North Midland said: “Of course being a brownfield site there were the inevitable problems caused by obstructions. But Aarsleff demonstrated a refreshing approach to these and simply relocated to an area where they could work whilst the matter was being dealt with. The result was that by working together the works were completed on programme and within budget. As a result of their performance on the JunXion, and also their specialist knowledge and experience of working in the Lincoln area, we contacted Aarsleff in the first instance with a mind to continue the good working relationship that had been built up previously.

View all posts by kirk →