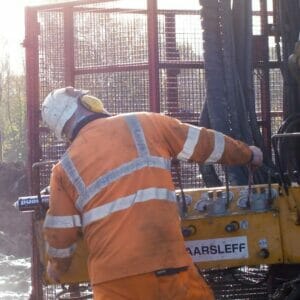 Aarsleff Ground Engineering carried out drilling and grouting operations for the construction of a state-of-the-art special needs primary school in Saltwell.

Located on the Shipcote Playing Field on Avenue Road, the new single-storey school building will cater for 170 key stage 1 and 2 pupils aged from 3 to 11 years. The school will feature secure external play facilities, a sensory courtyard, a hydrotherapy treatment pool and a multi-use games area.

On behalf of Wates Construction and Gateshead Council, Aarsleff were awarded the scheme in mid-October 2019, commencing on site on the 28th October and demobilising on the 17th December 2019.

Holes for drilling and grouting were spaced on a 4.25m staggered square grid, of which Aarsleff drilled 364 No. holes and mixed and injected 900 Tonnes of grout. 5% of the total number of holes
drilled on the site were pressure tested and 4No. grout cubes were taken per day to ensure compliance. The required grout strength was in the order of 0.7 – 1N/mm2.

Aarsleff deployed its Klemm 806, Boart drilling rig and bespoke grout batching equipment for the works, which were completed in December.

In the planning phase of the development, a desk study and subsequent site investigation were carried out which indicated the site was located on an overburden of soft clay between depths of 1.9m and 4.0m. Following the clay, there were consistent interbedded layers of Sandstone/Mudstone with rockhead ranging between 12.0m and 18.3m. Boreholes indicated that the majority of the site was Broken Ground/Soft with some boreholes still showing solid coal; the average thickness of the worked seam showed to be 2.6m at a depth of roughly 18m.